For the Rapid Route to Quantitative Gene Expression Data, Take the XPRESSWAY™

It has been said that gene expression researchers measure messenger RNA (mRNA) because they can and not because they want to.  Somewhat controversial perhaps, but the thought behind this is that measuring specific proteins and particularly functionally-active protein is all-important.  However, the reality is that measuring functional protein activity requires a bespoke assay while measuring specific proteins invariably requires the use of antibodies.  For new protein variants, antibodies are often unavailable, and even if they are, gene expression researchers have long-realized that antibodies frequently underperform in the lab.  Embarking on the process of generating an antibody or a functional assay for a new protein variant is therefore not always straightforward.

In sharp contrast, mRNA sequence measurement provides an astoundingly-specific and rapid approach for predicting gene expression in a generic manner.  Utilising Nature’s universal RNA code for protein expression together with the quantum leap in nucleic acid detection approaches of the last few decades, still presents an unrivaled tool for generic gene expression measurement.  Consequently, the obvious first port of call for any gene expression researcher who identifies a potential new protein variant is to measure the protein’s mRNA in appropriately-validated samples.  Only once a wealth of ‘easy’ and reliable mRNA data have been accumulated is it worth venturing into the potentially-challenging world of specific protein measurement, or at least starting both approaches in parallel.

At the peak of the genomics revolution, multiple groups were generating their own mRNA gene expression data for putative proteins from recently-identified gene sequences and these data were the first step to elucidating the function of orphan proteins 1,2.  Since then a number of databases generated from the efforts of these groups have been made publicly available via the internet such as GTEX and BioGPS.  Typically, these databases provide mRNA gene expression data from a wide range of non-disease tissues and cell lines providing the tissue distribution of a protein’s mRNA and therefore a valuable insight into its biological role.  The ability to compare and contrast the tissue distribution of a number of protein mRNAs is undoubtedly the first step to determining the level of interest in a particular protein.  For example, an ion channel which is restricted to a particular region of the brain is potentially a more interesting target for intervention than a member of the same ion channel family which has a widespread tissue distribution.  In addition, tissue distribution can be highly valuable when considering potential side effect and safety liabilities following target intervention.

While the focus of the past was on de-orphanizing putative gene sequences to find their protein’s function and thus protein family, the current focus of new gene expression research is frequently on novel splice variants.  This additional level of gene processing was not fully evident at the time the mRNA gene expression database work was conducted historically, and there is no ability to incorporate putative new variants into database searches.

All mRNAs in a sample can be assessed using next-generation sequencing-based mRNA gene expression platforms, which provide an overwhelming amount of data on mRNA sequences within a sample, but these represent both a considerable platform investment and an appreciable sample run cost. For those with interest in a putative novel variant relative to other known mRNAs, generating ‘small-scale’ data on such platforms is unrealistic.  What is required is a rapid-turnaround, cost-effective, highly mRNA variant-specific platform with unsurpassed sensitivity run on a controlled set of human body tissues.

BioIVT offers this solution through XPRESSWAYTM profiles.  Key features are:

In addition to the XPRESSWAY tissue distribution profiles described above, BioIVT also extends their qRT-PCR services to an extensive in-house bank of human tissue from both non-diseased and diseased tissues, as well as extending the study of mRNA to the cellular level using RNAscope in situ hybridization.  But if you are at the earliest stage of deciding whether a protein is worthy of your time and budget, and you need a rapid route to a decision, then take the XPRESSWAY.

Figure 1 shows a ‘reference’ XpressWay tissue distribution profile for KCNK2 (originally published as TREK-1 in 20003).  Since this publication, multiple new splice variants have been identified including the splice variant shown in Figure 2. Note that when all splice variants are measured together in Figure 1, KCNK2 mRNA is highest in the adrenal gland (tissue type 25) and otherwise detectable widely.  In contrast, the novel KCNK2 splice variant mRNA (Figure 2) shown is highest in stomach (tissue type 4), while also being present in adrenal gland (tissue type 25), but is otherwise restricted in distribution.  Such decision-making data are often not available in public gene expression databases. 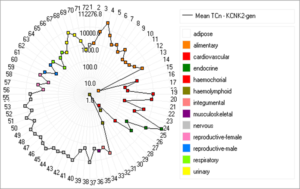 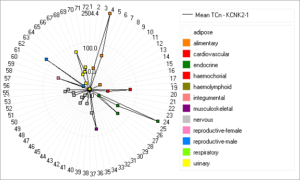