Immune activation, and the resulting inflammation, is an important component of liver homeostasis. During infection or situations resulting in acute liver injury, immune activation allows the liver to clear any pathogens and resolve damage through regeneration. Sustained uncontrolled inflammation, however, is a driving component of numerous liver diseases. Non-parenchymal cells (NPCs) of the liver, including Kupffer cells, orchestrate these immune responses. Kupffer cells, the resident macrophages of the liver, are localized to the hepatic sinusoid, allowing them to perform a surveillance role; enabling the liver to respond to pathogens and damage. The plasticity of the Kupffer cells’ response allows them to precisely regulate inflammation through phenotypic changes, resulting in differential expression of pro- or anti- inflammatory mediators. This critical regulation of inflammatory response by Kupffer cells makes them an important component of in vitro models of liver disease, as well as in vitro screening models for drug toxicity arising from inflammation-induced down-regulation of drug metabolizing enzymes (DME) and/or drug transporters.

Kupffer cells are an important element in cases of drug-induced liver injury (DILI), but due to their heterogeneity, their role in DILI is complex and they can both protect against DILI as well as cause it. Evidence suggests that for some drugs, Kupffer cells protect the liver from DILI by releasing hepatoprotective cytokines, including IL-10 and IL-6.1 For other drugs, Kupffer cells have been shown to significantly contribute to DILI through the release of pro-inflammatory cytokines, including TNF-α, IL-1β and IL-6, which can be either protective or damaging depending on the context.1,2 In some cases, the propensity of a drug to induce DILI may only be unveiled in vitro when Kupffer cells are present and directed toward a pro-inflammatory response. For example, studies performed at BioIVT demonstrated a significant increase in toxic response to hepatotoxic drugs such as trovafloxacin and clozapine when Kupffer cells were present in in vitro models with hepatocytes and induced to a pro-inflammatory state using lipopolysaccharide (LPS). In a study examining trovafloxacin, this effect was mediated by TNF-α, which corresponds with in vivo findings.3 These studies highlight the ability of in vitro models containing NPCs such as Kupffer cells to improve the replication and prediction of in vivo findings.

Many hepatic disorders are instigated and/or exacerbated through Kupffer cell mediated mechanisms. For example, the M1 (pro-inflammatory) or M2 (anti-inflammatory) polarization state of Kupffer cells has been demonstrated to be influenced by free fatty acids in vitro and high fat diets in vivo. In one study, SFAs or a high fat diet were found to induce an inflammatory state in Kupffer cells. Fatty acid-induced inflammation has been suggested to significantly contribute to the insulin resistance and hepatic steatosis that leads to NAFLD/NASH development.4 Kupffer cells also interact with hepatic stellate cells (HSC) to help drive liver fibrosis, which is a component of numerous hepatic disorders. Inflammatory mediators released from Kupffer cells, particularly TGF-β, induce hepatic stellate cell and transformation to myofibroblasts that deposit collagen, which can lead to fibrosis if not properly regulated.5

How Can BioIVT Support Your DILI and Liver Disease Research? 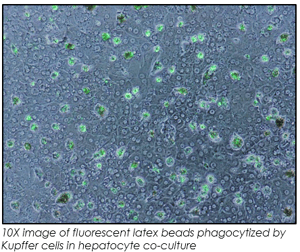 uses an affinity purification method based on cell surface markers that preferentially attach to magnetic beads, as measured by flow cytometric assessment of CD68-positive cells. In addition to purity, functional response (including IL-6 release in response to LPS and phagocytosis of fluorescent latex beads) is assessed in each high-purity Kupffer cell lot prior to release. The Kupffer-enriched NPCs are not assessed for purity and cell function. Either Kupffer product may be used in plated monocultures, co-cultures, and liver microtissue configurations.

BioIVT offers primary human hepatocytes that are scored for NAFLD Activity Score (NAS), a pathological scoring system that assesses the level of steatosis, inflammation, hepatocyte ballooning and associated FFPE blocks and H&E slides. Additional donor information regarding BMI, alcohol use and history of hypertension and diabetes is also available for our primary hepatocyte lots. We routinely screen hepatocyte lots for genetic variants in PNPLA3 and HSD17B13, which are known to influence NASH susceptibility.

We have an active research program dedicated to optimizing the isolation and characterization of hepatocytes. Here at BioIVT, we recognize the value of scientific partnership. Our technical advisors and research and development scientists are available to assist you in the selection and use of reagents for your hepatic studies. Contact us if you are interested in learning more about our product offerings.